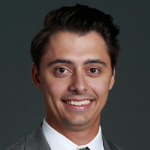 The NHL has introduced four new in-ice logo positions set to go live at the outset of the 2018.19 season. The concept was first tested at the 2017 NHL China Games and again during the 2018 NHL All-Star Weekend. How are these ad placements different from the current ones? What are they worth? What does this mean for clubs, fans, marketers and the like? Let’s take a look.

You may be familiar with the neutral zone ad placements on the outside of each of the four faceoff dots. I just looked through highlights and game footage from the ’80s and ’90s, and it looks like the first Stanley Cup finals they were in was ’93. I’ll work on finding the exact season they were introduced in, but you get the point for now. They’ve been in the game for the better part of three decades.

The new placements are on each goal line, located on the outer sides of each trapezoid. Logos are rotated 90° clockwise in the home end (broadcast right) and 90° counterclockwise in the away end (broadcast left). It’s also worth noting that the size limit of the new spots is 44 sq. ft., just over half that of the existing spots already in place. Lastly, Clubs are responsible for neutral zone inventory in the regular season and playoffs, while the NHL owns the new end zone inventory for the playoffs.

WHAT DOES THIS MEAN?

New, top-tier inventory. The NHL has given its clubs some significant real estate here. Most of the action in a hockey game happens in the attacking zones, so rinkboards below the upper hash marks are typically seen as the highest impression-generating sponsorship benefit available. But what about the intangible value of being in the ice at an NHL game? Clubs were always faced with this trade-off in the past when developing solutions for their partners. This new inventory offers the best of both worlds, which might just justify the early rumblings that clubs could see seven figures in incremental revenue.

NHL clubs are already in discussions with both new and existing partners about this opportunity.

Connect to peak moments. Watch any game broadcast and you’ll see the location of the goal line in-ice logos are on screen almost twice as long as those in the neutral zone. But the new ad placements will be smaller and rotated, so it’s a given that the quality of the exposures during live broadcasts will be lower. That’s why I think it is critical to think about WHEN these logos will be on-screen.

Every time a goal is scored, every time a great save is made and every time there’s a one-goal game with dying seconds to play, the brands in the ice behind the net will be front and centre. These are the peak moments in hockey that are replayed in nightly highlights, top 50 countdowns and shared on social media long after the live broadcast. The neutral zone locations rarely show up in residual programming, unless there’s a goal off the rush.

One of the greatest moments in Canucks history, and probably the most memorable clip for me, was when Alex Burrows “slayed the dragon” in 2011. Check out how prominent goal line in-ice would have been:

If there’s one thing marketers should take from this article, it’s this: location, location, location. Maybe the place you’re looking at is a bit smaller than you wanted and it faces the city when you were after a waterfront view, but it’s in a central location five minutes from the office and the value is expected to skyrocket with all of the new development in the area. I know I’m supposed to be writing about advertising in hockey and not the real estate market, but you can’t argue the parallels here.

The fan experience is as strong as ever. The NHL’s CRO, Keith Wachtel, said in a Media In Canada interview that there was little, if any, negative feedback from fans during the test period. It will be interesting to see what the League’s stance will be on optical illusion signs, similar to the 3D tent signage we’ve seen in basketball. Given the fact the ads will be on the playing surface, I doubt advertisers will be allowed to do much beyond a logo or a tagline. Overall, I don’t see any reason to believe the ads would hurt the fan experience in any way.